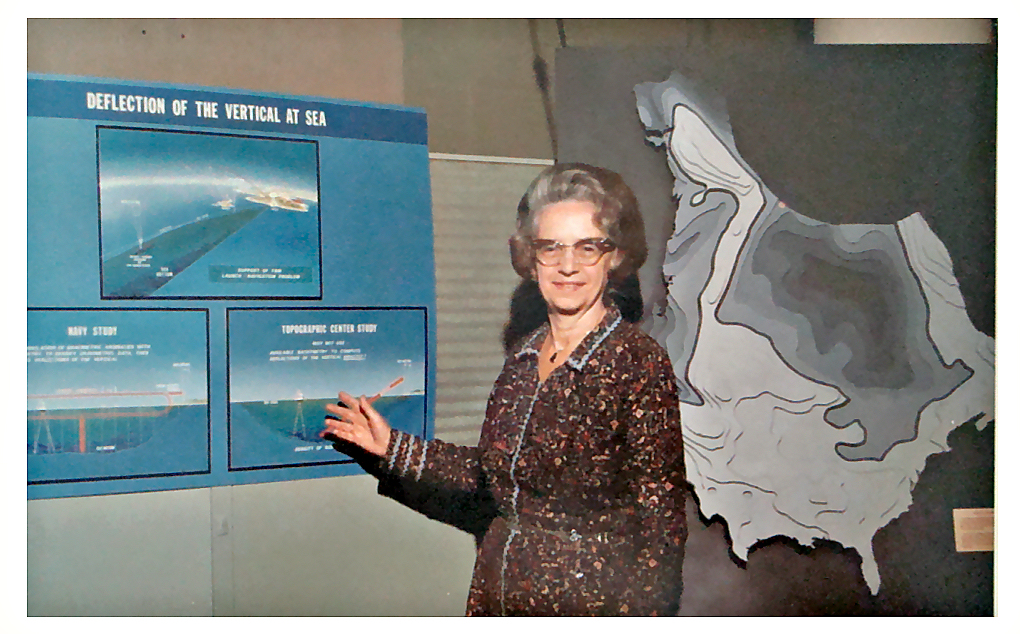 Irene Kaminka Fischer (1907-2009), the grande dame of 20th century geodesy, died on October 22, 2009 at the age of 102. During her 25 years at the United States Army Map Service and its successor agencies, spanning the period 1952-1977, she established an unmatched scientific record. Her workplace recognized her accomplishments by naming her to its Hall of Fame and presenting her the Department of Defense Distinguished Civilian Service Award and the U. S. Army Meritorious Civilian Service Medal. Her peers elected her to the U. S. National Academy of Engineering and a Fellow of the American Geophysical Union. The University of Karlsruhe granted her an honorary doctorate. An Earth spheroid employed operationally by NASA in the 1960’s bore her name. After her retirement from U. S. government service she received the first Federal Retiree of the Year Award.

Fischer was born in 1907 in Vienna, Austria, and graduated with a degree in mathematics from the Vienna Institute of Technology. She and her husband, Eric, a noted geographer, settled in the U. S. in 1941. After raising their children to school age she joined the Army Map Service in 1952 as a mathematician in the Research and Analysis Branch of the Geodetic Division. Subsequently she attained the position of Chief of the Geoid Branch of that Division, which she held until her retirement. Her entry into geodetic science coincided with three remarkable breakthroughs in that field in the 1950’s. First, the arrival of artificial satellites and space techniques enormously multiplied the quantity and scope of geodetic observations. She was fortunate to have John O’Keefe, one of the pioneers of the satellite era, as an initial mentor, Second, the introduction of electronic computers enabled that data to be handled much more expeditiously. The Army Map Service was the recipient of one of the first of these—the UNIVAC. Third, widened support for geodetic programs was recognized as essential for national security, and enabled resources to flow to her agency. During Fischer’s tenure, and due in large part to her contributions, the Army Map Service became acknowledged as one of the key centers of geodetic activities in the U. S.

Because Fischer outlived most of her contemporaries, her reputation today rests as an historical figure rather than as a direct influence on current research. Present-day geodesists are still concerned with refining the figure of the Earth and its gravitational field, but now primarily as functions of time. However, this would not be possible without the foundation that the previous generation built from the initial satellite data. That Fischer was among the most distinguished of this group is manifested by her more than 120 publications. Among the notable achievements that she participated in or was wholly responsible for were the revision of the International Ellipsoid in 1956, the refining of the NASA reference ellipsoid for satellite tracking, the transfer of astrogeodetic deflections of the vertical into geoid contours, the construction of the Department of Defense 1960 World Geodetic System, the creation of the South American 1969 Datum, the reconciliation of oceanographic with geodetic leveling, and the construction of oceanic calibration zones for satellite altimetry. A more complete summary of her work can be found in a centennial tribute to her appearing in Survey Review, July, 2007.

Apart from her research activities, she was an outstanding expositor. For example, she wrote articles for The Mathematics Teacher to explain basic geodetic concepts and results to students, and published a geometry textbook. Geodetic history was one of her favorite avocations (cf. «At the Dawn of Geodesy», Bull. Géodésique, June 1981). Her agency took advantage of her reputation and skills, both written and oral, for innumerable presentations to high ranking government authorities.

Fischer was an engaged member of the worldwide geodetic community and developed close friendships with leading geodesists in many countries, especially Guy Bomford and Erik Tengström. Starting with the Toronto IAG General Assembly in 1957, she and her husband became well-known participants at international geodetic gatherings. Almost immediately she joined, and eventually headed, several IAG Special Study Groups and at the 1963 Berkeley Assembly was elected a Section Secretary. Inevitably she would have attained at least a Section Presidency, but unfortunately her agency refused permission for her to attend the 1971 Assembly in Moscow, when she would have been considered for that office. However, her many friends were gratified to see her and Eric again at the 1975 Grenoble and 1979 Canberra meetings.

One of Fischer’s most lasting legacies is her unconventional memoir «Geodesy? What’s That? My Personal Involvement in the Age-old Quest for the Size and Shape of the Earth», a fascinating, detailed account of her 25 years as a research geodesist. It provides a unique window into this critical transition period for geodesy and many other sciences. She frankly describes her handicaps as a female in the male-oriented environment of the 1950’s, and the bureaucratic obstructions she had to face. But she also gave «tribute to the many friendly souls at all levels who made my government service such an interesting and satisfying experience». Her organization lost an irreplaceable resource upon her retirement, but her continuing presence among us long afterward has served as a felicitous bridge from 20th to 21st century geodesy.